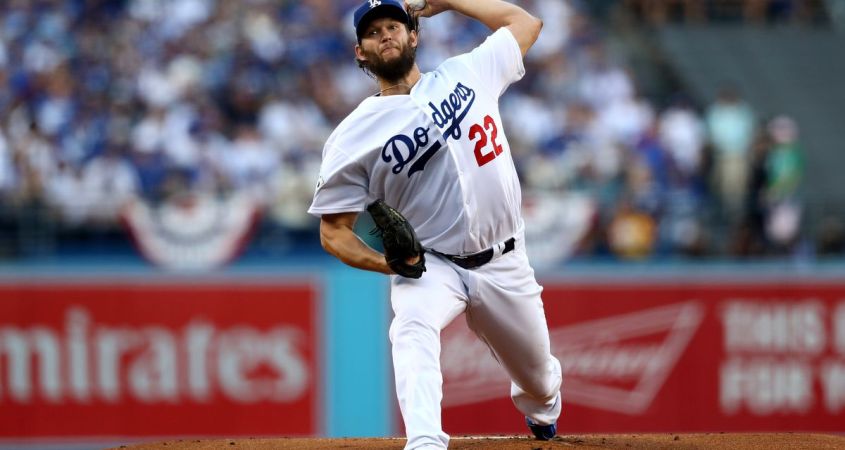 I’ve been doing this series since January (Pedro Martinez at the ’99 All-Star Game was the first). Every week. Lots of fun breakdowns and all manner of pitching nerdery, and yet somehow I have never covered Clayton Kershaw. You know, three-time Cy Young winner. MVP. Definite Hall of Famer.

Never covered. Sigh. It’s a stain on my career.

I can remember a young Kersh tantalizing prospect watchers way back when, and boy oh boy did he ever deliver on that promise. Kershaw’s peak is basically otherworldly. You’d feel weird having this kind of run in MLB: The Show. (Are my sliders out of whack? Am I accidentally playing on Easy?).

And the thing with Kershaw is, he’s a painter. Kershaw had ridiculous stuff, but he wasn’t a Roger Clemens or Max Scherzer type, beating you into submission with high velocities. Kershaw could dial up the heat, no doubt, but he dominated more with pinpoint control and breathtaking movement. Kershaw at his peak was a marvel. His curveball, in particular, was a work of art.

Age never loses, and Kershaw isn’t the pitcher he once was, but dude, that’s a long slope down to the bottom. He’s still great; 117 innings, 146 ERA+ in 2019. Heavy is the head that wears the crown. Let’s take a look at his recent work in the third inning against the Washington Nationals.

END_OF_DOCUMENT_TOKEN_TO_BE_REPLACED 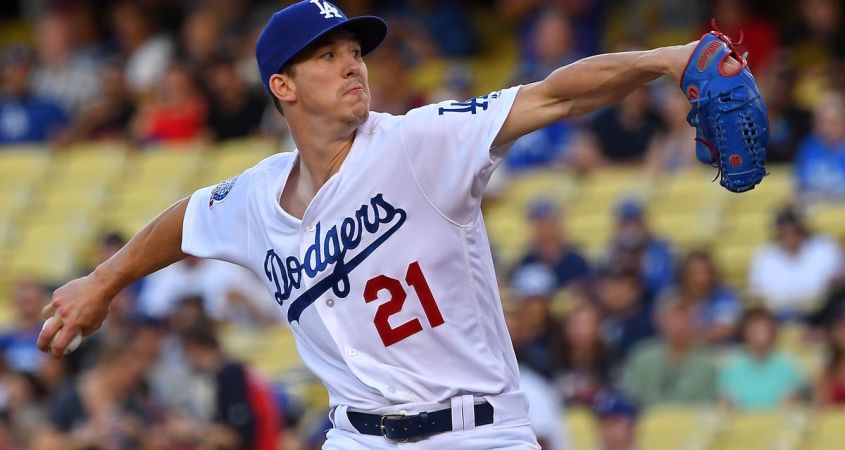 It’s a real treat to face the Los Angeles Dodgers lately, ain’t it? A real picnic. First, you have to hope your pitching isn’t lit up by Cody Bellinger, Joc Pederson, Justin Turner and the rest of the boys in blue. In the somewhat unlikely event you don’t give up six homers, your offense has to face what’s becoming a rather frightening collection of starters.

First, you have the current favorite for the National League Cy Young, Hyun-Jin Ryu. (We profiled him a few weeks ago. Spoiler: He’s awesome.) Ryu will carve you up with every trick and technique in the book; he changes speeds, moves around the zone, messes with timing and generally gives batters fits. But hey, maybe you avoid Ryu. Great!

Clayton Kershaw is a future Hall of Famer and is coming off one of the greatest peaks a hurler has ever had. Uh oh! But, by the grace of the scheduling gods maybe you avoid him too. Phew!

Enter Walker Buehler. Your luck has probably just run out. Buehler, on the later side of 24, flashed elite potential in his nearly 130 innings last year, punching out more than a man per nine and pitching to a 3.04 FIP. Pretty darn good. The stuff is special; his fastball sits in the upper 90s and has elite spin. He throws it a lot and hitters are managing a meager .217 batting average against it. That heater elevates two pretty damn good breaking balls to elite status, especially the curve; hitters are missing 45 percent of the time against it.

Buehler took to the Dodger Stadium mound on Friday, June 21 and turned in an epic performance against the Colorado Rockies. Let’s study that ninth inning, where Buehler managed an epic climax to his evening.

END_OF_DOCUMENT_TOKEN_TO_BE_REPLACED 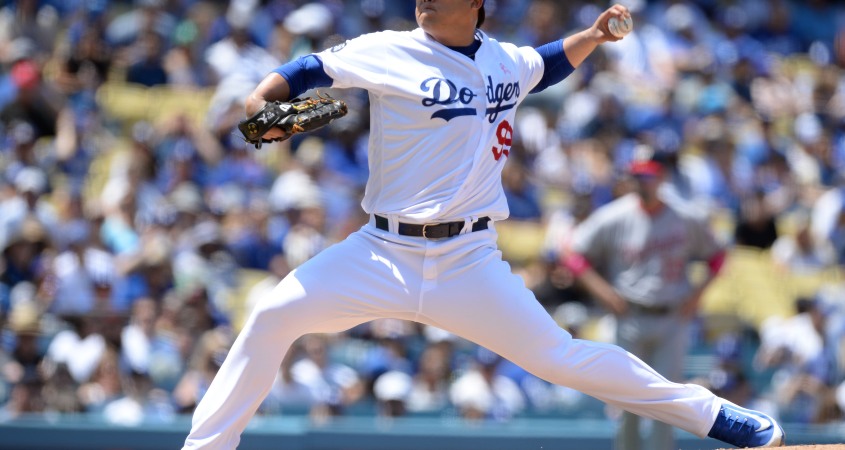 The Los Angeles Dodgers again appear to be the class of the National League. Led offensively by right fielder Cody Bellinger, the Dodgers lead the NL in runs scored and are already eight games up in the NL West, as of Thursday morning. Things are going well.

The pitching has been excellent too, led in great part by Hyun-Jin Ryu’s tremendous start. Ryu, healthy now after seasons dimmed by injuries, has come out of the gate better than ever: 65 innings, 1.65 ERA (2.59 FIP), 25.6 strikeout rate, 1.7 walk rate, 0.83 HR/9. Let’s take stock of this. Ryu has been fortunate — he’s stranding tons of runners and his BABIP isn’t quite normal — but he’s also been legitimately great, mostly because he commits so few unforced errors.

I love a pitcher who doesn’t walk anybody, and Ryu has been diving in the dumpster for aluminum cans stingy. No one managed a walk rate below 3.6% last season — credit to Miles Mikolas — and Ryu isn’t likely to keep his so low either, but even at 5% he’s helping his cause tremendously. Smart pitchers don’t give anything away for free.

We know Ryu doesn’t hurt himself. This sets him up for success, but how does he attack hitters? Well, he doesn’t work like some of the hurlers we’ve studied recently in this series. Ryu doesn’t throw hard (Justin Verlander), can’t unfurl a science-fiction changeup (Luis Castillo) and doesn’t spin a high-spin hammer (Domingo German). His stuff isn’t otherworldly, but it’s good. OK. What sets the Dodgers lefty apart is how well he’s mastered sequencing and tunneling. He’s an absolute master at keeping hitters off-balance, which is the name of the game no matter how hard you throw or what the ball does after you have.

If the hitter is comfortable, you’re in trouble. If he’s not, you’ve got him. That’s the story whether you’re Max Scherzer or Luis Cessa.

Whether Ryu keeps up his Cy Young pace is a question for a different column; so far, he’s been superb and gifted us a great lesson in how to really pitch. Let’s take a look at his recent effort against the Pittsburgh Pirates.

Ryu attacks every inch of the strike zone

Wanna be a great pitcher but lack Scherzer-level stuff? There’s a way, but it requires a lot of precision. You’ve got to limit the unforced errors — walks and bombs, kids, walks and bombs — and you’ve got to work the plate every which way. No patterns, no predictability. Lots of first-pitch strikes and keep the chess board tilted in your favor. You have to outthink the hitter and use everything in your disposal to keep him off-balance.

Ryu is quite good at this. He has a sort of hitch-y delivery and hides the ball behind his torso, which elevates the effectiveness of everything he throws. And because of that slight hitch — you’ll see it — Ryu can play timing games with the hitter. A slight strategic pause can be the difference between a double to the wall and a meek ground out during a long, grueling at-bat.

It’s not just the fastball or the curve, the slider or the change. It’s how you throw them, where you throw them and every single action in between.

Adam Frazier steps up to open the game for the Pirates and grounds out weakly after one pitch. This is exactly what I was talking about. Ryu drops a mid-80s change right over the absolute heart of the plate and the batter dribbles it to third base.

Bryan Reynolds steps up and gets a changeup for a called strike one. This changeup,  dropped neatly on the outside corner, obviously was better located than the former. Keep an eye on where Ryu puts it; the location is critical for what comes next.

Sometimes it can be a little hard to properly visualize sequencing. It’s not like the cut on a fastball or the drop on a curve; it’s more of an idea than a tangible thing. (Tunneling, of course, can be viewed wonderfully via gifs like the Pitching Ninja produces.)

Alas, Ryu gives us the quintessential look with this hammer of a curve. Reynolds did not see this coming at all; that swing screams “I thought you were going outside again.” Out of the hand, I’m sure this looked like another pitch in the same spot as before. Not a bad notion! Pitchers love to double up.

Ah, but this is where the deception comes into play. Ryu, and pitchers like him, have to be a few steps ahead. Sure, could someone like Jacob deGrom just throw the same damn pitch again and punt the deception in favor of raw stuff? Yes. But Ryu isn’t that guy. He can’t just cowboy up and shove the ball past the hitter.

So he doesn’t. He sets Reynolds’ eyes high and spins a curve that starts up and finishes down. Easy swing and miss.

Think about this. Ryu started at the belt with a change, then spun a curve below the knees and now finishes the poor dude with a fastball way above the zone. This is utter and complete domination. While a hurler like Verlander might just pummel you with fastballs until you break, Ryu twists you into knots and renders you so uncomfortable as to be helpless.

Look at Reynolds after he misses. Pity the poor soul.

That earned a slower look:

Starling Marte is up and swings right over a low sinker for strike one. Just a note for hitters; giving Ryu whiffs out of the zone is a great way to end up out. He’s not likely to lose the advantage in the count once you’ve given it to him, either. If Marte is to reach base, he’ll probably have to do it from a pitcher’s count.

Another master class in sequencing. Never give the batter a pattern or anything to latch onto. Marte flails at a fastball below the zone to open the exchange, and rather than feed him another, Ryu stands him up with a heater right below the hands for a superb called strike two. Brilliant.

Young pitchers, take note of stuff like this. Marte is a good and dangerous hitter, but Ryu already has him uneasy.

Um. What is there to say? Ryu puts a changeup way, way out of the zone and Marte absolutely flails at it. The ball was in the other batter’s box, for heaven’s sake, but because Ryu had the outfielder so messed up he couldn’t hold up.

Ryu, as the saying goes, was living rent-free in Marte’s head.

Certainly, this series is fond of pitchers with barn-burning stuff. Who doesn’t love a Luis Castillo changeup or a Blake Treinen sinker? As much fun as that is, studying someone like Ryu is more rewarding. Why? Because we can learn in clear detail how to keep hitters off balance and out of sync. We can learn how to steal easy outs — like the first at-bat above — and how to work all throughout the zone.

Most young pitchers won’t grow up to throw 98 MPH, but they can learn to work like this. They can learn to change speeds and eye levels, to work inside and out, to mess with timing and attack the hitter on every front. Pitchers don’t get hitters out on stuff alone.