Quick. By wRC+, who has been the best hitting shortstop in baseball this year? I’ll give you a minute.

And stop. Let’s hear it.

The answer is Twins shortstop Jorge Polanco — who was 2019’s first batter to hit for the cycle — with a robust 165 wRC+ to start the year, first among shortstops and 8th in all of baseball. Pretty slick. Polanco’s never produced a wRC+ above 110 in a full season (he’s hit that number twice, in 2015 and 2018) and further, never hit more than 13 bombs. Through 38 games, he’s already at 8.

Something fun is cooking with Polanco and the Twins overall, who sit in first place in the AL Central and third in run differential in the AL, buoyed in part by an exceptional offensive start.

A couple things stick out for the young shortstop:

You tell me, guys. Is it better to strike out less, walk more and hit the ball harder and with a higher launch angle? Yes. Yes it is. Check out his 2019 heat map (note that the numbers are his slugging percentage per pitch): 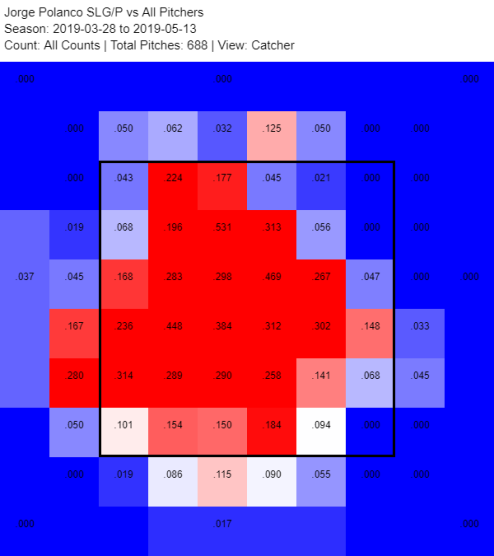 Throw the ball over the heart of the plate at your own peril against 2019 Jorge Polanco. He’s especially mashing fastballs, slugging an incredible .700 off heaters. That, kiddos, is good.

Obviously, it’s fun to marvel at the heatmaps and the Statcast metrics, but I’m more impressed with the improvement to his walk and strikeout numbers. A young player who learns to walk more is a young player I like, and Polanco’s still only 25. These sorts of developments can and do happen. Polanco always profiled as a high-contact player — more on this in a moment — so him adding patience and power are quite encouraging signs.

It should be noted that he’s carrying a somewhat-high .345 BABIP, but as long as it stays somewhere above .300, he’ll be fine. Given his pedigree, he might be able to maintain that — through the 77 games he played last season, his BABIP was that same .345.

This slow-motion video of Polanco’s swing shows us just compact and quick to the ball he is. No wasted effort.

I’m not saying he’s going to maintain his 2019 pace, but I do think he’s an above-average hitter now.  Even if he ends up around 120-130 wRC+, for a shortstop that’s a heck of a number. For example: last year, Francisco Lindor hit a 130 wRC+, Javier Baez 131 wRC+ and Xander Bogaerts 133 wRC+. That would be some great company to maintain.

It’s still early enough that Polanco could regress. Maybe pitchers probe around enough and find an opening; maybe that leads to more strikeouts, which subsequently drags down the overall production. It’s early and this is baseball, where nothing can be fully believed as Gospel. Things happen.

But this feels real. We’re seeing things that tell us this isn’t a fluke — much like Luke Voit bashing the cover off the ball indicated his early success wasn’t temporary. We can see tangible things from Polanco that suggest he’s taken a serious step forward.

Given that the Indians rolled the dice on health and came up snake eyes — Corey Kluber and Mike Clevinger are hurt, Jose Ramirez seemingly can’t hit anymore — Polanco’s emergence comes at a great time. The AL Central is wide open.

Why not the Twins? Byron Buxton is healthy and running his way into a slugging percentage north of .400; Eddie Rosario is tied for second in the AL in homers; Jose Berrios‘ curveball is so gorgeous I want to buy it dinner and try my luck; Mitch Garver probably hasn’t become Ted Williams, but hey, it’s something. (I really, really want Buxton to maintain his current production with the bat; baseball needs players like him.)

Look, some of what has lifted the Twins to their strong start will fade. I doubt Rosario hits more than 40 homers and I seriously doubt Garver maintains his surge in isolated power (especially after last night, yikes). But with the Indians reeling, the Twins have a great opening.

Some brief musings on the big trade announced last night.

In case you missed it, the Cincinnati Reds and Los Angeles Dodgers announced a blockbuster trade that sent outfielders Yasiel Puig and Matt Kemp, starting pitcher Alex Wood and utilityman Kyle Farmer to the Reds in exchange for starting pitcher Homer Bailey and prospects Jeter Downs and Josiah Gray.

For the Dodgers, the intent is obvious. They wanted to shed some salary and open up roster spots. (Someone named Bryce Harper is available. You familiar? You can read my breakdown of Harper on Patreon.) The Dodgers aren’t losing anyone they can’t live without, and ultimately if Harper ends up in Los Angeles, this deal makes plenty of sense. If they end up with someone below his level — maybe AJ Pollock — the deal feels more like an oddly-timed salary dump.

The Dodgers remain one of the best teams in the National League despite two frustrating World Series losses. Clayton Kershaw is still quite good and given the Dodgers’ considerable financial resources, they should certainly pursue Harper. This deal simply makes that easier. They can still win the World Series.

Downs and Gray are both years away from being factors on the field for Los Angeles. Downs — did you know he’s a shortstop? His name is Jeter. Isn’t that neat? Ask every major baseball writer if they think it’s worth noting — has a higher ceiling but given how often the Dodgers swing trades, who knows if either guy sees the field for them.

The Dodgers have already cut Bailey, who has been either terrible or hurt since signing his big contract a few years ago. He’ll probably fight for a rotation spot somewhere in spring training.

For the Reds, other than shedding Bailey (who had become a bit of a pariah amongst fans) the goal here seems to be avoiding the 90-loss plateau again. After a run of playoff appearances in the early-to-mid 2010s, the Reds have been glued to the bottom of the NL Central the last four seasons. Not pretty. A run of rough front office decisions hasn’t helped matters.

That said, without question, the 2019 Reds look considerably better now than a week ago.

Alex Wood might be the best pitcher on the staff now, depending on how Luis Castillo pans out. Wood isn’t a dominant arm by any means, but he’s consistently good.  Sometimes writers and fans alike get worked up dreaming about the Klubers and the Corbins while ignoring backbone starters like Wood. The Reds were one of the worst pitching clubs in baseball last season, mind you. He’ll help them.

Yasiel Puig is a tremendous glove in the outfield and a pretty solid hitter, although likely as a platoon bat against righties (he of the reverse platoon split). He’s drawn plenty of attention for some of his antics, but Dodgers players seemed to like him and his clubhouse behavior has been lauded.

Oh, and bat flips. He’s really good at those:

Given that Great American Ball Park is, um, a bit more hitter-friendly than Dodger Stadium, Reds fans should become acquainted with Mr. Puig’s flips next summer.

Kemp doesn’t have near the platoon split of Puig, but he’s a defensive liability and fell apart in the second half last season. Luckily the Reds have enough outfield options to rotate Kemp around, but he probably shouldn’t be a consistent starter.

The bigger question for Cincinnati isn’t the strength of the return or even what they gave up, but rather how the front office views the team. The Reds are perhaps a distant playoff contender now, but given their dismal pitching situation, it’s not certain. So why do this? Are they going to give up a bunch of prospects in a bid to acquire someone like Kluber? Maybe, but unless they want to spend the money to keep Puig and Wood around (both are free agents are in 2020) it’s risky. There isn’t a truly great free agent pitcher to add, either (No, waiter, I’ll pass on the Dallas Keuchel and his plummeting peripherals, thanks).

But credit to the Reds for the effort. Teams tend to either focus on winning 100 or losing 100, but baseball flourishes when teams across the spectrum are trying to compete, regardless of the best way to profit. Even if the Reds aren’t good enough to make October, they’re trying. A few things go their way — Castillo emerges as a good starter, prized prospect Nick Senzel kicks down the door — and maybe things will look pretty solid in the Queen City.