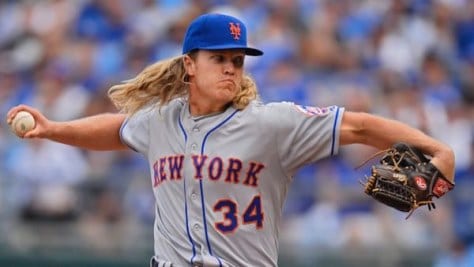 What a couple weeks for Thor!

No Avengers: Endgame spoilers here, but rest assured Chris Hemsworth wasn’t the only golden-haired Asgardian with a hell of a story to tell.

Noah Syndergaard is a tantalizing pitcher. He broke into the big leagues at 22 and was pretty good; one year later, he was awesome and pitched deep into the postseason with the Mets. Ultimately, of course, the Kansas City Royals won the 2015 World Series. Syndergaard would dominate the San Francisco Giants in the next year’s Wild Card game but still manage a loss, and that has been that for Thor in the playoffs.

A torn lat muscle short-circuited his 2017, but he rebounded for a pretty good 2018. You might have heard, his teammate Jacob deGrom was pretty good too.

Syndergaard was a trendy Cy Young pick heading into the season. He might be a trendy Cy Young pick for a long time. The stuff is bonkers; he throws really hard and has an absolute hammer of a curveball. Oddly, his strikeout numbers aren’t always off the charts (155 Ks in 154 IP last season), but the run prevention is there (121 ERA+).

He’s really good. Odds seem positive that he becomes really great. Against the Cincinnati Reds last week, he was that guy; economical, grabbing easy outs, flashing that stuff when necessary and even a little something extra.

Look, this Mets season has been weird. Pete Alonso has been fun! deGrom has been hurt and not quite great, which is frustrating. Edwin Diaz was amazing last year and has scuffled. It’s all very Mets. The NL East is a bloodbath and who knows how well the team will fare.

But today, oh today, we’ve got something fun for the Mets fans. It’s the bottom of the third, scored tied 0-0. Here’s what happened with the very first pitch Noah Syndergaard saw.

Pitchers wallop home runs from time to time. It’s not common, but it happens. But man this is cool. Syndergaard reached out and smacked this to left-center. Bang.

So it’s 1-0. Let’s leap to the top of the 9th inning, and Syndergaard has been cruising; 92 pitches, 3 hits, 1 walk, 8 Ks. 1-0 lead. Pretty darn economical for a dude with his penchant for strikeouts, but then again, the Reds aren’t reminding anyone of the Big Red Machine right now either.

Up first is a personal pet favorite of mine, Jesse Winker. I think Winker should be glued into left field and kept there all season; let him evolve at the plate (he should produce solid OBPs out of the gate) and figure it out in the field. He could be valuable when the Reds are ready to win.

Oh, and he also annoys the heck out of opposing fans and teams. I find that fun. Syndergaard greets him with a low curveball that Winker bounces foul.

Syndergaard comes back with a running fastball for strike two. It looks bad initially; if you listen to the SNY broadcast, even they have a fit with this call. Because catcher Wilson Ramos‘ glove moves so much, this appears to be a glaring miss from home plate umpire Marty Foster. Winker goes ballistic — he enjoys putting on a show, and I can imagine from his angle that this seemed an egregious missed call — before his manager, David Bell, can rescue him. Winker gets tossed.

But actually … it’s a strike. Look at that movement! As soon as the ball enters the frame until Ramos squeezes it, that pitch is running to the outside corner. Incredible.

Foster got the call right.

Unfortunately, Reds ace and recent Ode to a Pitcher selection Luis Castillo got caught in the crossfire.

Once Winker’s shenanigans ended, Kyle Farmer stepped up to the plate inheriting his teammate’s 0-2 count. What a gift! It’s probably a lot of fun to try and be productive with an 0-2 count against Noah Syndergaard. Like, a lot of fun.

At least it was brief. Thor dials up the gas on the outside corner and he’s two outs away from a shutout.

Eugenio Suarez is a pretty good hitter. You should know this if you don’t. He produced a 116 wRC+ in 2017 and a very healthy 135 wRC+ last season. He has pretty nice pop and has turned into the team’s best hitter, assuming Nick Senzel doesn’t go bonkers out of the gate (he might) and Joey Votto doesn’t rebound (I hope he does).

I just wanted to share that because his plate appearance in the ninth inning only lasted one pitch. Syndergaard kind of got away with one here; the Reds third baseman is slugging a healthy .613 on the season off fastballs as of this writing. But not today.

One out to go.

Derek Dietrich, future beekeeper, steps up with no runway left. Thor misses a little low with a sinker to start the count 1-0.

Dietrich watches a nifty curve drop in for strike two. Thor has generated whiffs on nearly 60 percent of the swings against that hammer this season. That seems good.

With the count 1-1, Syndergaard runs a fastball belt-high over the plate and Dietrich bounces it into right field for a single. An impressive piece of hitting; it would be easy to foul this off given the action on the ball and velocity. Credit to Dietrich here.

Michael Lorenzen pinch runs for Dietrich and up comes Yasiel Puig with a chance to tie it. Before this plate appearance, Puig had produced outs on the first pitch three straight times against Syndergaard. His generous donation helped Thor run up such a mild pitch count through 24 outs. The Reds outfielder takes strike one outside.

The fun with guys like Syndergaard is he throws this beauty of a sinker, smashes the outside corner and we breeze by it like nothing special happened. This is a crazy good pitch.

Lorenzen takes off for second — an odd risk with two outs and a pitcher running who never stole a base before — while Syndergaard removes Puig from his cleats with this curveball. He actually hangs it, but Puig was so geared up for the gas he couldn’t navigate the speed difference.

0-2. Lorenzen on second. Syndergaard threw a nuclear sinker for strike one and a solid curveball for a swinging second strike. Now what?

Gas. The 104th pitch of the day is a 99.6 MPH sinker on the outside corner for a smooth strike three. Love the little pose there at the end too. Don’t question the power of Thor.

Since 1908, this was just the seventh time in MLB that a pitcher threw a shutout and homered in a 1-0 win, per Baseball Reference. It hasn’t happened since 1983, when Dodgers hurler Bob Welch pulled it off.

Impressive. Syndergaard didn’t have a great May — that ERA was hovering around 5 — but the potential remains immense. There are lots of excellent pitchers in baseball and he has everything he needs to become one of them. What a treat it would be to see Thor light up MLB over the summer, especially if deGrom straightens himself out, too. The Mets might have a reason to believe.

A Mets team led by deGrom, Syndergaard, Alonso and Cano could wreak havoc over the summer.