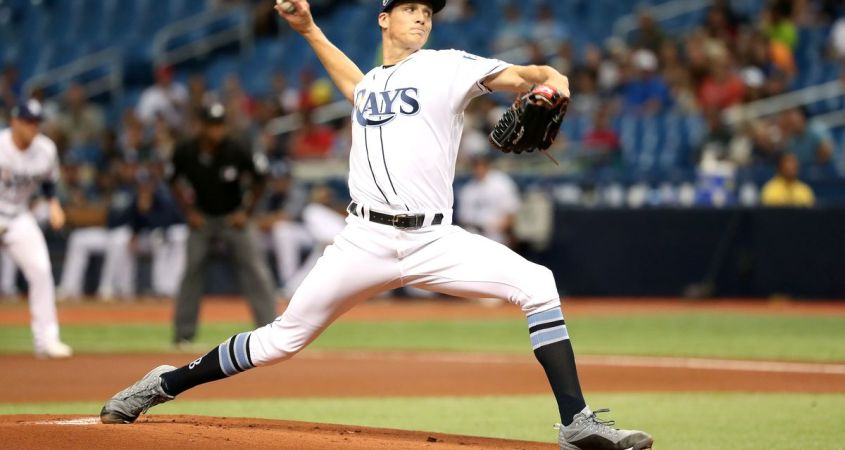 If you’ve heard of Tampa Bay Rays righthander Tyler Glasnow, it’s probably because he has a glorious hook. His curveball is a classic 12-6 hammer. It’s even more impressive coming from his 6-foot-8 frame. Hitters can’t do much with it (.285 xwOBA last year, .164 this year) and for good reason. Examined as part of Glasnow’s full repertoire, batters are stuck; do you sit on the fastball or the curve?

Alas, not this day. Sale struggled and Glasnow dominated. With Blake Snell injured, Glasnow has provided high-quality innings amid a torrid start for the Rays. I’m not saying Glasnow has emerged as an ace — his numbers are good but not exactly explosive, unlike Luis Castillo for example — but I am saying he’s someone to keep an eye on.

Today we’ll study how he works his fastball. Dude throws hard, and even though the spin isn’t great, he keeps batters uncomfortable by working it throughout the zone and keeping that curve in the forefront of the batter’s mind.

Jackie Bradley Jr. steps up to open the bottom of the third against Glasnow. Note the extension in the lanky hurler’s delivery and how well he finishes through the ball. He’s maximizing his height to add life to the fastball. I really like his mechanics, and I’m also intrigued his working from the stretch regardless of baserunners. It keeps things simple.

JBJ gets another fastball and knocks it foul to even the count 1-1. Bradley’s not much known as a hitter, but he did slug almost .500 against fastballs last season. Rarely is a belt-high fastball ideal, but no one is perfect.

Awesome pitch. I love the confidence to put a fastball right under the hands like this, flat-out challenging Bradley to do something with it. Make no mistake, a lot of hitters can — David Ortiz seemed to smash high fastballs like this — but it’s not easy. It’s especially not easy against a fastball like Tyler Glasnow’s.

JBJ is down 1-2 and Glasnow unleashes the hammer, but leaves it just high enough in the zone that the Red Sox centerfielder bounces it foul. You can still get a look at the movement, though — Bradley flails at it. Glasnow makes sure to finish through the ball, too, to help hide any tells about the breaking pitch.

Another good pitch. Glasnow brings Bradley’s eyes back up with a fastball after working down with the curve. Follow the pattern: fastball up against the hands, curve down by the knees, fastball above the hands. That’s sequencing, kiddos, and it works. A pitcher who can work all throughout the zone is a pitcher who keeps batters uncomfortable, and uncomfortable batters are less likely to mash taters.

Bradley’s still 1-2 but Glasnow is working him. Remember in the intro when I asked if a hitter can afford to sit on the fastball or the curve? Well, at a certain point, you just gotta guess. It sucks, it’s a miserable feeling, but you just gotta sit on something. Bradley chooses the fastball but gets the hook for a called strike three. He knows it too.

Let’s enjoy the break on that badboy:

Catcher Christian Vazquez steps in and is blown away by a Glasnow fastball for strike one. Hitting a good Major League fastball is just a tough beat, man. It’s not easy. Vazquez isn’t much of a hitter anyway, but he shouldn’t feel much shame here.

Glasnow nearly slings one into the fifteenth row for the second pitch in the at-bat. Hey, at least he kept Vazquez’s eye level high, right? Heh.

Absolutely beautiful pitch. Vazquez knows he can’t do anything with it and lets it go, hoping for ball two. Nope. Glasnow has firm control of the at-bat, having eaten the Red Sox catcher’s lunch with the first heater and painted up and in with the third. This is a bad place to be, man.

Andrew Benintendi presents a far more stout threat than Vazquez or Bradley Jr. The latter two are known primarily for their defense; Benintendi can hit (123 OPS+ last season). The young leftfielder watches a fastball for ball one.

Benintendi gets another high fastball and wisely takes it for ball two.

No pitcher wants to be down 2-0 in the count. The hitter knows you’ll probably be working in the zone to avoid an even worse situation. Glasnow does work in the zone, but throws a changeup (yes, a changeup, at 93 MPH) and Benintendi misses for strike one.

Let’s talk about this for a second. Tyler Glasnow just threw a 93 MPH changeup. It’s not quite as uncommon as you might think, given that Norse gods like Noah Syndergaard exist. Regardless, Glasnow rarely throws the change so we can’t exactly say it’s a good or bad pitch, but it worked here.

I don’t know guys. I think Glasnow likes working up and in. He blasted Bradley Jr with a fastball up and in, buzzed the tower on Vazquez and dropped a 91 MPH changeup on Benintendi in the same spot as Bradley’s. If you look at Rays catcher Mike Zunino‘s glove, Glasnow either missed or threw to a different spot. I can’t tell ya, but given Benintendi’s reaction, it worked.

Glasnow leveraged two changeups to drag the count back into his favor. Now Benintendi has to be ready for the fastball, the curve and presumably even a third changeup. The lanky hurler has proven he can throw the fastball and the change anywhere he wants in the zone. As a batter, you have some plate to cover here.

Glasnow comes up but away with a 97 MPH fastball and just misses off the plate to run the count full. Good take by Benintendi.

Pretend you’re Glasnow. What are you going with? You drew a swinging strike on a low change and a called strike on a high change. You’ve missed with three fastballs. Is it time for the curve? It’d be tempting, for sure. If you can tunnel it a little behind the fastball and bury it low, you’ll be forcing Benintendi to adjust to the break, the speed and the spot.

Or, you know, you could put an upper-90s heater right by his hands. Sure. Let’s try that.

That’s exactly what Glasnow does, and man what a sight it is. Catching up to that kind of heat in that spot is just a damned hard thing to do. If Glasnow leaves the fastball a bit more arm side — that is, a bit further out over the plate — maybe Benintendi gets a little wood on it. That leads to another pitch, and you never know what can happen with just one more pitch.

But Glasnow affords no such opportunity. Hell of a pitch.

Glasnow throws a lot of fastballs. So far this year, 66.1% of his pitches have been heaters. Last year, it was 70.5%. Even though the curve is fun, he lives and breathes off that gas. And as we saw today, because he can put it wherever he wants, it becomes all the more valuable a pitch.