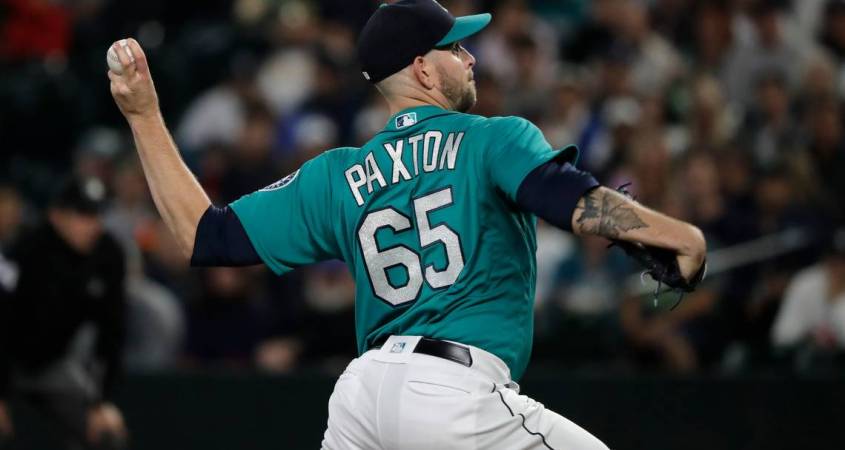 James Paxton threw a no-hitter last season. It was a big deal for reasons beyond the obvious, namely that the aptly named Big Maple did the deed in Toronto, Canada.

He also struck out 16 in a start last season. If it’s possible for a pitcher with those exploits to go somewhat under covered, Paxton might be that guy. Hidden away on a struggling Seattle Mariners team and only managing around 160 innings due to his usual assortment of injuries, Paxton didn’t make a ton of waves.

Well, that’ll change this year. Paxton was traded to the New York Yankees last November, and with the Bombers missing ace Luis Severino, the spotlight will find the tall lefty in short measure.

Is he ready for it? Probably — the issue is whether he’ll be healthy. We know what he can do when he’s on the mound — a lot of strikeouts, too many home runs. Overall, it makes him an above-average starter with the potential to be more.

But we’re not so worried about all that today. No, we just want to study a pitcher being awesome. In Paxton’s 16-K decimation of the Oakland Athletics, he was just that — living off a hard fastball all over the zone, mixing in a nasty knuckle-curve and generally pummeling a pretty darn good team.

Marcus Semien (94 OPS+) is greeted with a Paxton fastball to open the at-bat. Paxton’s fastball is hard but actually lacks truly elite spin (54th percentile). It helps that he’s left-handed with such a fluid delivery, but alas, the numbers are the numbers. Herein lies the reason why Paxton allows so many home runs, by the way.

However: an upper-90s fastball is no picnic.

Semien fouls it off right against the hands.

In today’s exchanges, Paxton does a good job moving the ball around, proving he can locate that fastball anywhere. Semien, with his rather compact swing, knocks another fastball foul to fall behind 0-2.

So, Semien is down 0-2 against a dude about to strike out 16. You probably know what’s coming — but unlike so many previous pitchers we’ve profiled, Paxton doesn’t have a ridiculous breaking pitch to go with here. His curveball is pretty good, but not radioactive.

However, because of sequencing, Paxton has the full plate to work with. Sometimes it’s as simple as that, and when he shows Semien the cutter down, the A’s leadoff hitter can’t resist.

Chad Pinder (113 OPS+) gets a look at the Paxton fastball, fouling it away. Paxton shows little fear of coming in on the righty bat, although neither Pinder or Semien are power threats. (One is coming, though.)

Pay attention to catcher Mike Zunino‘s glove. It barely moves. Breaking: well-located fastballs are hard to hit, guys, all the more so at this velocity. Pinder takes one inside for a called strike and Paxton has another hitter 0-2.

Notice how Paxton’s hand is hidden from the batter for so long? Deception goes a long way toward keeping hitters off balance and allows his other offerings to work. Hitting isn’t easy; Paxton’s delivery makes it harder.

An upper-90s fastball up in the zone makes it pretty close to impossible. Down goes Pinder.

Without spoiling it, I’d love to ask Paxton and Zunino about this Jed Lowrie (119 OPS+) at-bat. I have so many questions about their approach and pitch usage, in great part because I want to learn, but also because it was a bit puzzling.

Lowrie, despite quite the healthy hack, gets absolutely overpowered by Paxton’s fastball to open the at-bat.

You can tell the big Mariner was feeling it. He’s struck out two hitters with fastballs and he just hammered one past the newest man in the box. What a feeling.

It’s not hard to imagine what Paxton goes with next.

Paxton, sitting pretty in an 0-2 count, goes right back to the hard stuff again, but left it right over the zone and Lowrie makes solid contact … off of Zunino’s mask. Yikes.

He was fine, but this isn’t a good pitch, even despite the velocity.

At this point, I begin to wonder why Paxton didn’t go offspeed. You’ve thrown Lowrie, a pretty solid hitter, three fastballs in a row. The last one he was almost on.

I certainly understand setting a batter’s eyes up in the zone so you can attack low. Hmm. Maybe I’m just not cut out to be a pitcher — breaking news — but going back to the fastball here feels a smidge risky.

Now Paxton changes things up, going with the cutter. However, it was right over the plate — look where Zunino sets up — and Lowrie was able to knock it foul. Not a great pitch.

Our first taste of the curve, Paxton changes the terrain but Lowrie takes it. Heck of a take. The breaking ball looks pretty good to my untrained eye.

So now what? Paxton missed with the cutter and Lowrie took the curve for a ball. He’s fouled off each fastball he’s seen since the first one. Paxton is six pitches deep into the battle and the batter has seen the whole repertoire.

Ultimately, the big lefty goes back to the fastball but misses again and Lowrie deposits it into the outfield for a single.

I know this series is called Ode to a Pitcher, but let’s take a moment and appreciate what Jed Lowrie does here. He fends off fastball after fastball, all over the zone, after missing the first one. He adjusts to a cutter up and away and takes a nice curveball below the zone. Then, finally, when he gets a fastball right over the plate he flicks it into the outfield. That was his pitch and he handled it well.

Now Paxton faces a major home run threat in Khris Davis (136 OPS+). I couldn’t fault you for thinking of, say, Aaron Judge or Mike Trout as the game’s premier power hitter, but Davis is at least in the picture and in fact, led the bigs in bombs last season.

If Paxton messes around this game will be 2-0 in a hurry.

With a runner on first, Paxton comes right at the Athletics slugger with a fastball that misses just above the zone.

Big Maple, looking to balance the count, throws another fastball up and in. It misses and the count runs to 2-0, not great. But there is some value in the sequencing here. You don’t want a slugger like Davis feeling comfortable stretching out over the plate.

Consider this as a Mariner fan. You watched Paxton blast away two hitters to open the inning. Man, Big Maple’s looking good today!

Then, he engages in this long battle with Jed Lowrie, pounding fastball after fastball only to lose. Okay. Not great, but no big deal. Just a single. Now, though, he’s working behind in the count against a true slugger. If Paxton has suddenly lost the zone — as pitchers do, even great ones — this inning turns from a lot of fun to a lot of yuck real quick.

This is a critical pitch. You can guess what the lefthander turns to.

(And, for the record, no I’m not sure why the previous fastball was a ball but this next one is a strike. Props to Zunino for yanking this fastball back over the corner, by the way.)

Paxton’s worked fastballs inside the last two pitches. Probably don’t want to go back to that, so with the count 2-1 let’s consider the options:

Paxton chooses the first, delivering a hard fastball neatly on the outside corner that Davis can’t catch up to. Excellent pitch in sequence and a great look at the power of working both sides of the plate.

Like a lot of sluggers, Davis pops plenty of homers but he also strikes out a lot (sixth most in the AL last year). While you might expect Paxton to break out that curveball here with the count 2-2, after so many fastballs, he doesn’t. The hard-thrower instead moves the fastball back inside and gets a called strike three to end the threat.

This inning served for me as a great exercise in the power of a good fastball. Paxton barely turns to his offspeed pitches to attack the Athletics; instead, he works them with fastballs all over the zone, flashing velocity and command all the way. Unlike, say, a Max Scherzer who might pummel you with fastballs to set up the changeup, in today’s breakdown we see a pitcher able to set up and finish batters with just one pitch.

Paxton is a critical part of the Yankees rotation this year, especially with their ace on the injured list. How will he fare? He has the stuff to make a run at a Cy Young but given the change in ballparks (Yankee Stadium is far more hitter-friendly, thus exasperating his home run issues) and Paxton’s tendency to suffer through lots of minor injuries, might this acquisition end up faring more like Javier Vasquez (both times) or Sonny Gray? Every Yankee fan reading this just shuddered.

Probably not. Hard fastballs tend to travel and Big Maple has one — but he’ll certainly be facing bigger moments in pinstripes than he did out west.

Previous Ode to a Pitcher breakdowns:

One thought on “Ode to a Pitcher: James Paxton attacks the A’s with fastballs”