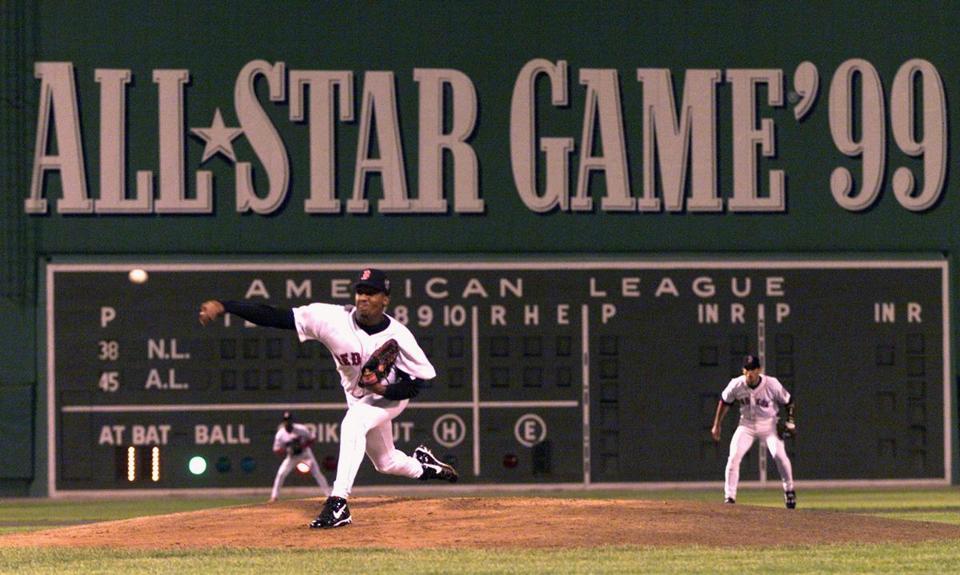 At his peak, Pedro Martinez was the best pitcher who ever lived, a terrifying combination of tremendous ability and unquenchable intensity. Standing below 6 feet and weighing around 160 pounds, he wasn’t exactly the picture of dominance. But years of being told he was too small left a mark on young Pedro. Once he fully assumed his powers, he didn’t exist just to win, but to see his enemies driven from before him and to hear the lamentations of their women.

I jest. But only kind of.

“That was the result of the negativity around me, telling me, ‘No, you can’t,’ when I knew I could,” Martinez said shortly after being inducted to the Baseball Hall of Fame in 2015. “That transformed my mind and my body.”

We sometimes indulge in superlatives with sports. It’s part of the fun, right? So know that I don’t mean this literally, but Martinez was a killer. His strikeouts had the punctuality of a breakaway LeBron James dunk, finished routinely with glares and side-eye. Martinez wasn’t here for handshakes after the game. He was here to sit your ass down.

Each punchout and stare came with a lesson. How dare you challenge me?

This is why I love Pedro Martinez.

If one wishes to breakdown excellent Martinez seasons, there are plenty of options. I am choosing his 1999 season because of three events:

We’ll focus on the first of those three moments today. The 1999 season wasn’t short of star power, but on a warm summer night in Boston, the season revolved around #45. Martinez was having an excellent season up to that point:

Lord. You’ll be shocked to learn he went on to the 1999 AL Cy Young award unanimously.

The ’99 All-Star Game packs sentimental value for two reasons. One, as we are getting to, Martinez stacked the National League’s best hitters up like cordwood. Two, Red Sox legend and Hall of Famer Ted Williams made an appearance as part of MLB unveiling the nominees for its All-Century Team:

(If you care at all about baseball history, watch at least the first minute or two.)

To follow along at home with Martinez performance, watch here. I’ll be providing plenty of gifs for those of you who can’t.

Martinez’s first batter was Reds shortstop Barry Larkin. Martinez starts him off with a high fastball that misses, then pumps another right by Larkin for strike one. The Fox radar gun says 94.

The next offering is a nasty changeup that breaks off the plate low and away. This is a critical development — the outside corner is now in play. The changeup is likely Martinez’s nastiest pitch, a wicked combination of arm action (everything Martinez throws looks the same out of his hand), speed difference, and that plunging movement. If you Google “best pitches ever” you’ll find his change mentioned more than once.

The fourth pitch is a 95 MPH fastball on the outside corner, in the exact spot the changeup would have gone had it been a fastball. Larkin takes it for a called strike two. How do you decide which one is coming? Martinez is far too good to give you any type of tell.

Martinez comes middle-in with the next fastball. Larkin fouls it away. The sixth pitch in the at-bat is the hardest fastball so far, 97 MPH, on the inside corner. Larkin manages to foul it off. It’s no accident that Martinez established the outside and started moving in. He’s setting Larkin up.

The seventh pitch is a 98 MPH heater square on the outside corner. Larkin dives out over the plate to barely knock it foul. At this point, Martinez is completely in control. He has both sides of the plate and two ridiculous breaking pitches to go with here.

He chooses the change.

Barry Larkin is one of the most disciplined hitters in baseball. He’s the 1995 NL MVP and a Hall of Famer. Martinez made him look foolish. Why? A combination of things. Martinez established he could place the fastball anywhere, and that his changeup and fastball are perfectly tunneled. You can’t tell the one from the other out of the hand. Add in that rollercoaster movement and you have a highlight-reel punchout.

Next up is the 1997 NL MVP Larry Walker, hitting a whopping .382 at the break. Martinez starts him off with a nasty change for a called strike one. (The brief glimpse of a 1999-era Fox lineup graphic comes free of charge, just for you.)

Walker fends off a hard fastball high-and-away to set the count 0-2. As we just saw with Barry Larkin, this a no good very bad place to be as a hitter against 1999 Pedro Martinez.

Walker takes another high-and-away fastball for a ball.

The Fenway crowd roars. In the moment, you start to notice something special is happening. Pedro Martinez just sliced up two of the best hitters alive.

That cover ran in December of 1998. Those damn togas hurt the sport more than any steroid use, and justice for those crimes was served on this very night by Judge Pedro Martinez.

Martinez starts Slammin’ Sammy off with his first curve of the evening, just off the plate away. Those of you watching the video will note that Sosa seems to flinch a bit. Who can blame the guy? It’s a nasty ball one.

I’m not saying Martinez read Sosa’s reaction and intentionally threw the same pitch more inside, but given how it played out I’d prefer to believe it.

The same tunneling principle that submarined Larkin applies here with the curveball. Look, guys, a Martinez fastball threatening to careen off your dome is a serious reason for concern. I’d probably stop, drop and roll. Sosa flinches and the curve drops in for a called strike.

Martinez comes back with a fastball high and away for ball two. It’s a deliberate pitch, not a miss, and it sets up the changeup that Sosa swings through for strike two.

Now Sosa is in utter peril. The crowd rises. The announcers make mention of the dominance on display.

This is an eff-you fastball. Don’t forget: Sammy Sosa is a tremendous power hitter. He finished his career with more than 600 bombs.

No matter. Martinez fears no man and blows him away.

Now comes the main event. Mark McGwire, Sosa’s fellow toga-wearing heathen, steps up to the dish to open the second inning. Just so it isn’t lost on you how great Mark McGwire had been, take a gander at his last three seasons:

He was awesome. Those numbers were certainly … enhanced … but it was quite a show. His at-bats became national events late in 1998, and given that baseball fans were very much still reveling in the wonder of endless moonshots, seeing McGwire step in against Martinez was a treat.

Now, unfortunately, our video fails us here by lurching to the end of the McGwire at-bat. Baseball-Reference tells us the at-bat to this point had went ball, called strike and swinging strike. The count is 1-2. Here is the finish:

Another one bites the dust.

Next up is Matt Williams, a forgotten All-Star in an era of legends. To be fair, Williams is batting fourth only because Giants leftfielder Barry Bonds was hurt and unable to play. That’s no slight to Williams, mind you.

Alas, Williams does something no one else will tonight. He puts a ball in play, a curveball hit weakly to second. The usually surehanded Roberto Alomar bobbles the feed and remarkably the National Leaguers get a man on base.

Martinez takes to the stretch to face another superb National League first baseman (handling the DH role tonight) in Jeff Bagwell. He opens the affair with a 96 MPH fastball on the black for strike one. Bagwell steps out and seems upset with the call. (He might have a point — umpires in this era were a smidge liberal with the outside corner.)

In a great example of both sequencing and tunneling, Martinez follows the fastball up with a curveball off the edge for a ball. He’s done this several times tonight, setting up one pitch with another. I doubt he expected Bagwell to swing, but now he has to be wary of the breaking ball off the plate.

Third pitch is a nasty changeup in the same spot as the fastball for a called strike. Martinez is living on the outside corner and Bagwell hasn’t moved the bat once. He’s in the 1-2 danger zone now, too.

Martinez keeps him looking away with a 97 MPH fastball well off the plate, so far in fact that it was effectively a pitchout. If Matt Williams was foolish enough to venture far off first base, Pudge Rodriguez was more than ready to gun him down. Williams — for now, anyway — stays put. 2-2.

Martinez offers another 97 MPH fastball, this one more up than away for ball three. Pudge shows off his arm and nearly picks Williams off first. It’s the All-Star Game and people do funny things in exhibitions, but … Matt Williams wants to test Pudge Rodriguez?

Now the count is full. The crowd is ready. Martinez has been pumping fastballs to Bagwell. Who wants to guess what’s coming?

Bagwell goes down helplessly against perhaps the nastiest changeup of the night and Pudge guns Williams down. Inning over.

Let’s review what we just saw, shall we? Pedro Martinez just faced Barry Larkin, Larry Walker, Sammy Sosa, Mark McGwire, Matt Williams and Jeff Bagwell. He struck out five. If Pudge hasn’t thrown out Williams, Martinez would have faced Mike Piazza with an opportunity to punch out six in an All-Star Game. Wow.

Martinez’s performance didn’t surprise the American League’s manager, Joe Torre, who said he expected a clean sweep of strikeouts. That didn’t happen — thanks again, Matt Williams — but what did happen was a dominating display of power and finesse, strategy and swagger.

In a night full of stars, Pedro Martinez grabbed the spotlight and never let go.

6 thoughts on “Ode to a Pitcher: Pedro Martinez at the ’99 All-Star Game”