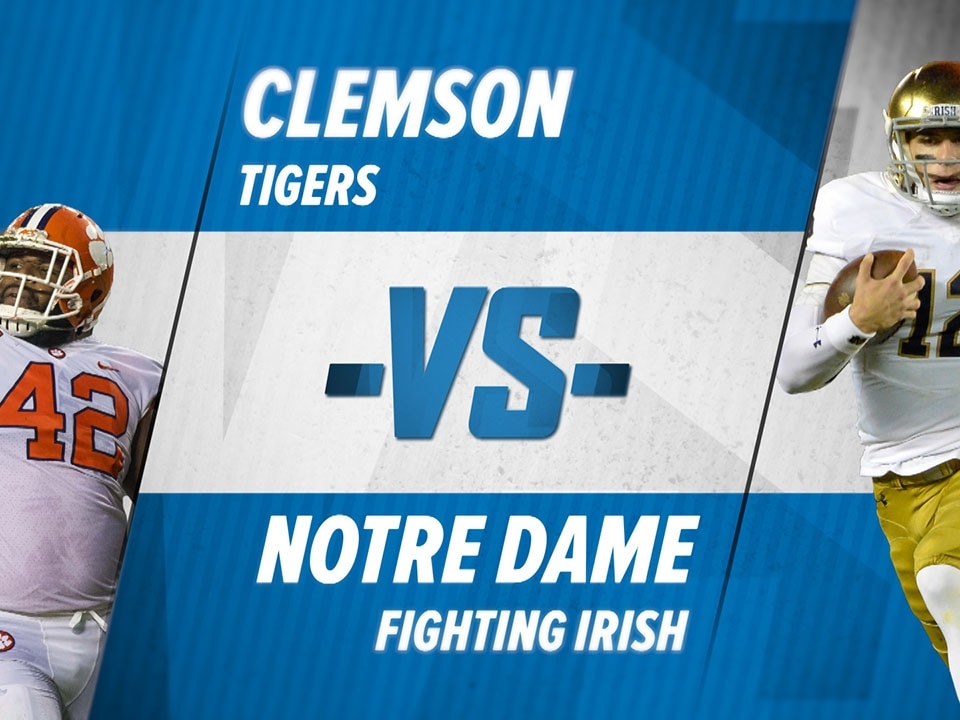 For the fourth consecutive season, Dabo Swinney and the Clemson Tigers are in the College Football Playoff. Each year they’ve had the pleasure of dancing with the sport’s other powerhouse, Nick Saban’s Alabama Crimson Tide. A fifth matchup is doable, but to get to there will mean overcoming an excellent Notre Dame team.

Clemson will be the favorite (-10.5 by Bovada as of this writing) when the game kicks off from the Cotton Bowl at 4 p.m. on Saturday. They have the star young quarterback and the pedigree. But this isn’t 2012. The Irish are for real. They pack an elite defense and a playmaking quarterback.

Great offenses tend to ebb and flow on the arm of a great quarterback. Swinney knows this as well as anyone. This run of success started with Tajh Boyd, who led the Tigers back into national prominence with an Orange Bowl victory over Ohio State.

Swinney replaced Boyd with one of the best college quarterbacks ever and an eventual first-round pick, Deshaun Watson. Watson famously lit up the Crimson Tide twice in national championship games and claimed one for himself.

Then Watson became a star for the Houston Texans. Next up? Kelly Bryant.

It would be silly to suggest Bryant wasn’t good, but by no means was he on the level of his predecessors. The Clemson defense led the way last year, but the offense struggled at times and proved punchless when it counted. Clemson was summarily choked out by the Tide in last year’s college football semifinal.

Swinney has set a high bar, no doubt. Those expectations led to him benching Bryant this season for uber-recruit Trevor Lawrence, and almost instantly the Tigers became dangerous again (they finished the season ranked 7th in Off. S&P+). Lawrence tossed 24 TDs to only 4 INTs and provided a dimension the Tigers didn’t have before.

It helps, of course, to have an awesome running back in Travis Etienne and an offensive line full of future NFL draft picks. Talent is never an issue in Death Valley. As such, other than games where Lawrence didn’t play much or at all, the Tigers have put up points in droves. This is what we expect from a powerhouse program.

I don’t know if that continues on Dec. 29, because Notre Dame presents quite a challenge. The Irish are arguably the best defense Clemson has faced this season (4th in Def. S&P+)  and boast three All-Americans (defensive back Julian Love, lineman and probable first-round pick Jerry Tillery and linebacker Te’von Coney.). Swinney credited Notre Dame with presenting a complex attack, full of disguises and feints.

Just two years ago the Irish could barely rush the passer. Now they are an ironclad unit. Fixing a leaky part of the defense bonded the big men, and the coaching staff recognizes that. they trust the players to make accurate reads and communicate pre-snap to attack offenses.

The Irish are smart and experienced. They present by far the toughest test yet for young Lawrence. I expect Clemson will manage to put some points, but don’t be surprised if at halftime the Tigers look as toothless as they did last year.

Just as the Tigers’ offense kicked into gear after making a change behind center, the Irish came to life in much the same way. Brandon Wimbush opened the year at the helm but the offense sputtered. After three games (all wins, mind you) Kelly pulled Wimbush and went with Ian Book. Book is simply the better thrower and it showed immediately.

Facing a friskier than you’d think Wake Forest team, Book tossed two touchdowns and ran for three more in the win. Few offenses will flourish with a passer who can’t consistently connect downfield, as the Irish discovered. Book is a better fit for a modern offense (especially with Notre Dame’s rather large set of wide receivers), and coincidentally the Irish ended up being pretty darn good (26th in Offensive S&P+).

However … for as promising as Book and the Irish offense has looked, and with all due respect to the Orange, Syracuse ain’t lining up across from them. The issue for Notre Dame is the lack of serious challenge they’ve faced since an early-season victory over Michigan. Remember, Florida State and USC both stunk this season.

Clemson’s defense is the stuff of nightmares. Defensive coordinator Brent Venables has a closet full of NFL talent at his disposal. Defensive end Clelin Ferrell and defensive tackle Dexter Lawrence are both likely going to be first-round picks, and Ferrell might go top-10.

Lawrence, however, will miss the game after being flagged for having small amounts of a muscle growth substance called ostarine.  Losing the star defensive tackle pulls some teeth out of the Tigers’ defense, but this unit is loaded for bear. Such is the reality facing a powerhouse program like Clemson.

Before the season, as far back as June, college football watchers were ogling at the sheer talent level of the Tigers front seven. They’ve delivered. Other than an odd performance against South Carolina, the Tigers have looked excellent.

The story of the game hinges on how Notre Dame manages to give Book time to work in the pocket. Can the Irish keep him upright? I’m guessing the running game will be immediately neutralized and Book will have to create big plays on his own.

I’m not confident. It’d be a tall order for anyone, including the two quarterbacks in the other semi-final.

Anyone imagining the Cotton Bowl as a repeat of the 2012 National Championship only with Clemson replacing Alabama will be sorely disappointed. The Irish are really good. But ultimately it’s too hard to imagine Book and that offense making enough plays against the tremendous Tigers defense. I expect a lot of three-and-outs and probably a few turnovers.

The Irish must prove they can control the clock and move the ball against Clemson. It’s a tall order, and while Trevor Lawrence and Travis Etienne might not light up the Irish defense either, but it won’t matter. Even without Dexter Lawrence, the defense carries the day.

My Patrons read this first.

To get early access to stories like these sent straight to your inbox, join my Patreon for only $3 a month.

If you join at the $5 tier, you’ll get rapid-reaction analysis sent ASAP after big games.